An Entrepreneurship Center will be built in Vidalia


VIDALIA, Ga. (WTOC) – Almost a year ago, we reported that the city of Vidalia would be demolishing the Econo Inn, located in the heart of downtown, to make way for a project aimed at economic growth.

In March, that demo started and is now on open land.

For nearly four years, the Toombs County Development Authority has had its eye on this property. Now a $5.6 million state-of-the-art entrepreneurship center will be built there.

“We all know what happened here and how it has plagued our community for a long time. Now it will be the exact opposite. It’s going to be about life and growth and development,” said Mayor Doug Roper.

Mayor Doug Roper says that over time, the Econo Inn motel that was located here became an area of ​​criminal activity, and when the owner decided to close and sell, the city took over.

“We believe rural communities in Georgia can increase their own opportunities,” said Michele Johnson, president of the Greater Vidalia Chamber of Commerce and executive director of the Toombs County Development Authority.

So that’s exactly what they’re doing. Through a major partnership with local organizations and the state, the city announced the development of the Greater Vidalia Center for Rural Entrepreneurship.

“We’re always looking for ways to retain some of our local talent, and we understand that the environment is extremely important where you start a business,” Johnson said.

Michele Johnson is working with two organizations that help make this project happen. She says the center will occupy about half of this site.

It will house about 10 small start-ups at a time, who will rent space until they are ready to move their business to a permanent location.

“Perfect your dream before they go out into the real world. A place where they can share ideas and network and collaborate and be exposed to mentors.”

Johnson says the center is funded by state grants, special purpose funds and by the city, chamber and development authority.

“We want this to be an example for other communities of what rural entrepreneurship looks like,” said Mayor Roper.

Roper says there’s still a lot of design work and planning to do, but laying the groundwork for what’s to come is very exciting.

“We couldn’t be happier for many reasons. Because it will bring an anchor to our already existing great downtown and bring economic growth and development.”

The goal is for the center to be fully completed by June 2024. 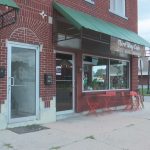 Previous Article Hilltop Rise is attracting entrepreneurs to the neighborhood 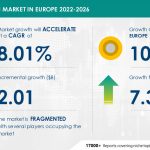 A trial shopping center in Haverfordwest offers an opportunity for seasonal entrepreneurs It may seem extremely early to be talking about Christmas, but now is […]