According to a news release from health authorities, the first monkeypox-related death in the United States was confirmed to have occurred in a resident of Los Angeles County, California.

On Monday, the Los Angeles Department of Public Health said that the CDC had also verified the fatality. The patient’s immune system was very weak, and they had recently been hospitalised.

The message advised those with weakened immune systems who believe they may have monkeypox to seek medical attention as soon as possible and to continue to be treated by a physician throughout their illness.

Although fatal cases of monkeypox are relatively uncommon, they can happen in susceptible populations such infants, expectant mothers, and people with weakened immune systems. A citizen of Harris County, Texas, who had monkeypox and a weakened immune system passed away last month, but officials couldn’t say for sure whether the virus was to blame.

According to the most recent CDC data, which excludes the death in the United States, 18 monkeypox deaths have been documented worldwide this year. In 103 countries, there have been about 58,000 cases of monkeypox.

According to the most recent CDC data, the U.S. has recorded the vast majority of cases—nearly 22,000—followed by more than 6,000 cases in Spain and Brazil.

More than 4,300 instances have been documented in California, 3,600 in New York, and 2,200 in Florida within the U.S. According to the most recent data, more than 1,800 persons in Los Angeles County have tested positive for monkeypox.

Public health officials have observed that monkeypox trends appear to be plateauing and slowly dropping in recent weeks. Major American cities including Chicago, New York, and San Francisco have started to report a decline in the number of new cases.

“A downward trend can be the most risky period,” he warned. “If it invites complacency.” WHO continues to advise all nations to maintain a certain mix of public health initiatives, as well as testing, research, and target immunisation when vaccines are available. 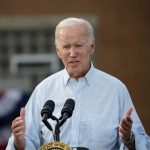 Next Article Get COVID-19 Boosters by Halloween, a White House Advisor Says

According to CDC data, those who did not receive the monkeypox vaccine had a 14 times higher risk of contracting the disease. The effectiveness of […]

Teenage Lack of Sleep May Contribute to Obesity

LaToya S. is concerned about her son’s sleeping patterns, as are many parents of teenagers. When her 13-year-old had no means to communicate with friends […]

Deadly “Rainbow Fentanyl” Looks Like Candy and May Entice Children

The U.S. Drug Enforcement Administration (DEA) is informing the public that “rainbow fentanyl,” fentanyl that has been coloured in a variety of bright colours, is […]