That strange smell in your house could be mold. Here’s how to check


Like climate change leads to increased flooding and more severe freezes, the extra moisture and humidity means more homes and businesses are susceptible to mold growth. Mold can lead to a range of illnesses, ranging from asthma and upper respiratory symptoms to organ damage and cognitive impairment. Michael Berg, technical director of Eurofins Environment Testing America, a company that does environmental testing for mold and other potential hazards, cited a research study that found the economic cost to society of exposure to moisture and mold to be over $22 billion.

With the Atlantic hurricane season beginning in June, consumers need to know how to deal with water and mold intrusion in their homes. Because mold can begin to grow within 24 to 48 hours, you should respond quickly to water intrusion by immediately removing damp materials (drywall, carpet, trim, etc.), using fans and dehumidifiers to dry out your home and open areas with trapped moisture in the air flow. Some lucky residents won’t have mold, but those who smell it, see it, or develop illnesses need to know what steps to consider, and that starts with a mold assessment.

The importance of proper assessment

Because there are no national standards for mold assessment and remediation, standards vary from state to state. Only a few states have indoor air quality (IAQ) laws that focus on mold, which leaves uneducated consumers at a disadvantage when faced with water intrusion. Doug Hoffman, executive director of the National Organization of Mold Remediators and Inspectors (NORMI), says NORMI has helped write mold laws in several states. Hoffman said consumers should think of the “mold appraiser as an architect” in charge of designing the scope and steps of a remediation project, while “the remediator is the contractor who does the work.” Hoffman says consumers shouldn’t try to save money on testing because testing mandates remediation, and incomplete testing can lead to incomplete remediation.

Mike Marshall, chief operating officer of Mold Inspection Sciences Texas and president of the Texas Mold Assessors and Remediators Association, agreed, saying that “insufficient assessment and testing can result in insufficient remediation”: You can’t fix what isn’t identified. I can vouch for the need for a thorough, professional mold evaluation. The cleanup and remediation took 20 months after my home exploded with toxic mold two decades ago. Part of the extended timeline was because insufficient testing led to a split remediation.

However, discarding uncontaminated materials can also create unnecessary expense. Marshall estimates that remediation can cost 15 to 20 times the cost of testing, so accurate testing can save customers a lot of money through targeted remediation. Berg said mold testing isn’t necessary in cases where there’s a clear path to fix the problem (such as after a flood or burst pipe), but it’s very useful when there’s hidden mold growth or when there are insurance claims or disputes. In our extreme experience with mold, logic did not dictate an exact remediation plan, so thorough testing was required. While the mold explosion started in our shower, tape sample tests revealed toxic mold throughout the house – in all three bathrooms, the kitchen, the laundry room, and more.

What happens during a mold assessment

Marshall says the best way to prepare is for consumers to understand what’s going on during a mold assessment. He says consumers often ask for mold testing because they smell or see something that looks funny, or because someone is sick and they don’t know why. In many cases this happens after a recent water intrusion.

Here’s how the assessment works in Texas, where I live. After the phone inspection, a mold inspector licensed by the state of Texas comes in for a detailed interview with the homeowner. Then the inspector performs an exterior inspection of the home to determine possible points of water entry: faulty roof, foundation problems, landscaping or mulching problems, window sealing, and so on. Then the inspector walks through each room with an infrared camera to see recent moisture events hidden behind walls or ceilings. If infrared detects areas of cooler temperatures, a moisture meter is used to see if water has collected there. They also test areas common for moisture intrusion, such as around windows, doors, and areas containing water lines.

Depending on the size of the room, the inspector will collect one or more air samples if he finds conditions conducive to mold growth. According to Marshall, the industry standard is to draw 75 liters of air for five minutes through a bio-pump with an air sampling cassette attached. An air sampling cassette captures cells (mold, skin, carpet bits, etc.) on an adhesive surface on a microscope slide. The cartridge is removed from the pump, sealed and sent to an independent laboratory not affiliated with the testing company under a strict Chain of Custody (COC) testing procedure. The chain of custody documents the transfer of the sample from the point of collection to delivery to the laboratory, including date, time and signatures for each time the sample changes hands. 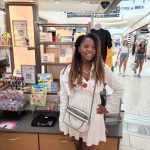 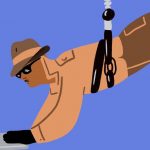 Next Article Five new financial jobs of the future

The first lady has tested positive for COVID-19 in a “rebound” instance following treatment with the antiviral drug Paxlovid, just like her husband, President Joe […]