The Large Hadron Collider is back, after a three-year hiatus


Residents of Nagla Tulai, a farming village in the northern Indian state of Uttar Pradesh, have always had to endure hot summers, but for the past few years, the punishingly brutal heat has tested their mettle. This May it reached 49°C (120°F), India’s highest recorded in 122 years. Since then, local reports have attributed more than 50 deaths to the record heat.

At the end of April, when the daytime temperature exceeded 45°C (113°F), most residents of Nagla Tulai sought help in the winds blowing outdoors. It is one of the few Indian villages yet to be electrified. This means that there are no fans, refrigerators and air conditioners for its 150 or so households.

The men in the village were forced to work no more than two hours a day in an attempt to avoid the hottest sun. As the temperatures increase every year, they are worried that they will have no choice but to leave Nagla Tulai in search of work in the cities; jobs that won’t pay them enough to bring their families with them.

News: The UN climate panel has warned that the world will need to remove billions of tonnes of carbon dioxide from the atmosphere every year, in addition to rapidly reducing emissions, to pull the planet back from increasingly dangerous levels of warming. Researchers and startups are working on a variety of methods, including building factories that suck up greenhouse gases and using minerals to sequester carbon.

Disputed Plans: Decarbonisation has become a touchy subject – there is real concern that an increasing focus on lowering greenhouse gas levels could encourage governments and companies to delay or even avoid the most obvious and direct way to tackle climate change: preventing emissions from getting into the atmosphere in the first place.

Complicated solution: Experts warn that, unfortunately, after decades of delay, there are now few paths to meeting climate change goals that do not require cutting emissions today and building capacity to absorb huge amounts of carbon dioxide in the future. Read the full story.

1 The Large Hadron Collider will come back to life today
CERN scientists hope to uncover more insights into how the universe works. (NPR)
+ It has been 10 years since the Higgs boson particle was discovered. (economist $)

2 The updated covid vaccine should be available in the fall
The problem is that we need them now. (NYT$)
+ The risk of re-infection is forcing health professionals to reconsider injecting. (FT $)

4 It’s time to end the stigma around menstrual blood
Some scientists and doctors shy away from the study, even though it could give us valuable insight into women’s health. (dark)
+ What if you could diagnose diseases with a tampon? (MIT Technology Review)

5 NASA’s probe is on its way to the Moon 🌕
It is on track to reach the moon by November. (Gizmodo)
+ The agency is also working on a detailed map of Mars. (input)

6 Rising inflation means we can’t afford to upgrade our computers
Which, along with the crypto crash, doesn’t bode well for semiconductor manufacturers. (WSJ $)

10 A mummified baby woolly mammoth was discovered in the Yukon
It may have coexisted with the ancestors of today’s First Nations peoples. (Gizmodo)
+ Researchers are divided on how the winged pterosaur was able to fly. (Ars Technica) 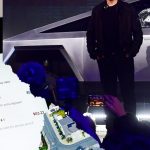 Previous Article Transportation applications promised to eliminate friction. But at what cost?

Next Article Five Scottish entrepreneurs who started their business in isolation

U.S. to Check Passengers From Uganda at 5 Airports For Ebola

The Biden administration has mandated that all travellers from Uganda land at five U.S. airports for health screenings as an Ebola outbreak in Africa worsens. […]

Roberta Flack Has ALS, Can No Longer Sing

Despite being unable to sing due to an incurable disease called ALS, singer Roberta Flack intends to continue working on projects, her manager stated on […]

How to set your phone’s maximum volume limit

Above this setting, you can see how many headset notifications you’ve received from your iPhone in the last six months. For a more detailed reading […]